Band Bonding: An Interview with Godsticks

After our raving review of The Envisage Conundrum by the incomparable UK-based Prog trio, Godsticks (in Episode #51), we were delighted to hear that the artists themselves had listened in and had shared our discussion with their fans. Naturally, we took this opportunity to learn as much as we could about the individuals behind the talent. And so we invite you to peruse the insights of Darran Charles, Steve Roberts, and Dan Nelson of the acclaimed Godsticks in this special overseas interview: 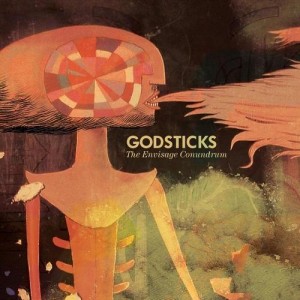 Crash Chords:  First off, an obvious question that’s been plaguing me: The Envisage Conundrum; any story behind the album name?

Darran:  I quite enjoy playing around with words, and putting two words together that don’t necessarily belong next to one another always grabs my interest!  It’s also important that the album title and artwork do not offer any preconceptions of the music therein; hopefully we’ve succeeded in doing that.

Crash Chords:  It’s clear that you all possess a range of styles and backgrounds.  With respect to the work on the album, which styles have you followed closest to fulfill that output?  Do you owe homage to any particular artists?

Dan:  Probably not any one particular artist but there are a lot of influences for me personally, including Pino Pallidino, Marcus Miller, Jeff Berlin, Jaco Pastorius, Janek Gwizdala, and Bryan Beller.

Steve: No-one in particular (for me), I think it was generally a consensus that the direction was going to be of a more heavy, guitar driven style overall though.

Darran:  Although I don’t think his influence is present in the music, Devin Townsend actually rekindled my interest in heavier music, especially his albums Ki and Terria.  I’d long fallen out of love with heavy music as I found it quite repetitive, but those Devin Townsend albums certainly demonstrated to me that the genre is far from dead and can be played with sincerity.

With regards to styles, I don’t think we write with any particular style in mind, or format for that matter.  For us, the criteria is always to make the song interesting enough to maintain our own interest. 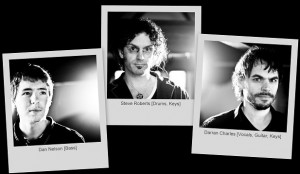 Crash Chords: Speaking to backgrounds specifically, what sort of instruction and experience have each of you had, growing up to the present day?

Dan:  I used to have private lessons for a few years from a great local teacher called Jon Caulfield. I also went to university for a year to study, though I can’t say I learnt anything in particular there apart from how to ‘Harvard reference’! At the moment I generally work on the music I like listening to and try to practice the life out of it. Also I’m slowly learning piano on my own, again just picking some pieces that I like and trying to work through them.

Darran: Experience-wise I’ve had very little: this is my first and probably last band.  I’ve never considered myself a ‘professional’ musician because I’ve never been interested in performing anyone else’s music.  Plus, making a living from music is incredibly difficult, whereas music is the reason I work for a living!

I had guitar lessons for a few years when I was very young from a local jazz guitar player, although I never really appreciated the things he tried to show me until much later in life.  I’m self-taught in the same way that most people are self-taught these days, which is from tuition magazines and books etc, etc. – I don’t think that allows you to claim that you’re self-taught, though.  I’ve always been particularly interested in music theory and spent a lot of time studying theory books and analysing the music I enjoyed listening to.  I was also fortunate enough to attend the Guitar Institute in London for 2 years on a part-time basis: that really opened up my mind to different styles of music and was a huge inspiration for me.

Steve: As far as instruction goes, none. Experience covers pretty much the whole gamut.. from pop/theatre work, rock bands, cover gigs, jazz fusion/trios, vocal groups, big bands and more recently funk and prog on drums and keyboards. All the usual, touring, radio/tv sessions and recording stands you in good stead to deal with pretty much any situation the road can throw at you.

Crash Chords:  What tends to be your first spark when writing?  Melody, lyrics, rhythm, chords?

Darran: Definitely a riff or chord is the spark for me.  I usually take my idea to rehearsal to allow Steve to perform his magic and give it rhythmic context.  If an idea doesn’t work with the drums then it’s usually scrapped.

Steve: Personally, it can be rhythm, chords or melody. 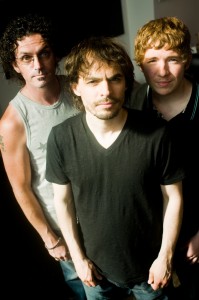 Crash Chords:  Meticulous composition or intuitive improv? Does your finished studio work owe its thunder to one over the other?

Steve: I think these two methods sum up Darran & myself perfectly…in that order!

Dan: I would say 90% of everything is written before going into the studio. But improvisation plays a big part in writing the appropriate parts. A lot of the time we can loop things and just try out some ideas while recording it, then listen back and pick out what we like and what we don’t like… then learn the good bits and continue like this!

Darran:  Both Dan and Steve are completely wrong and demonstrate that they each possess a very short memory!  Our finished studio work is without doubt owed to meticulous composition – nothing is left to chance prior to entering the studio.  All the guitar solos, the fills, the structure – everything has been arranged beforehand, and it’s basically my job to ensure Steve plays the drum parts he’s written for the demos!

Steve is both the easiest and most difficult person to compose with, but I can genuinely say that without him I wouldn’t be able to write the music.  I can’t work with drum machines because I’m an awful drummer, but more importantly Steve’s drum work constantly inspires me.  The reason he’s so difficult to work with is because he never plays the same thing twice; he’s forever improvising (hence our opposing answers to your question).

He’s correct in one sense, though: composition is the art of capturing improvisation, and I’ve elected myself responsible for capturing that improvisation and dissecting it until I’ve hit upon something that works.  Unfortunately, I know for a fact that the next time we rehearse one of these ideas, he will have absolutely no recollection of what he played previously!  Therefore, during rehearsal I make sure I arrive armed with his recorded improvisation from last time, and subsequently do my best to force him to reproduce that exact part. This is why I say he’s both easy and difficult to work with: easy because he always inspires the music, and difficult because the bastard won’t remember what he’s played!  My determination always wins out though, because the drum work I’ve captured is integral to the composition.

Crash Chords:  What improvements do you personally see between Spiral Vendetta and The Envisage Conundrum?

Darran:  We’re a lot more confident on this album.  For me personally, I’ve shied away from writing heavier music because, as mentioned earlier, I had a tendency to think that it’s all been done before.  Hopefully, we’ve brought our own approach to the genre.

Dan: Well the production is the biggest one in our opinion. TEC right from the start just sounds a lot thicker and less compressed than the first album. Also the newer material is easier to translate into a live performance as it is more guitar driven. 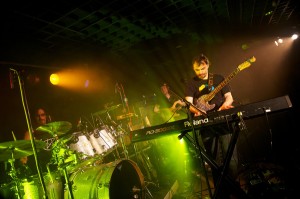 Crash Chords:  Speaking as someone who has never seen your live act, how does the work translate to the stage?  Do you feel anything gets lost or added?

Steve: TEC is definitely music for the stage and not just a studio project. We have cut down on virtually all of our live backing tracks which were way too prevalent when we first started playing the SV album live.

Darran:  Not as well as we’d like, to be blunt.  We hate relying on backing tracks and vowed after our last tour that we would not play live again until we found a keyboard player (which we have now found in Moray MacDonald).  It’s just proven so difficult to recruit players in the past which is why we’d postponed this move for so long.

Dan: It is difficult as we are playing just as a 3-piece with some very sparse keyboard backing parts running from a laptop. But we worked hard on getting good guitar tones and looking at different ways in which we could play the tracks and keep them sounding full. The newer material is certainly easier to translate into the live environment as it is more guitar-driven and less textural that the first album. We have also been using a vocal harmonizer on a few songs and that seems to work quite nicely. On the tour recently with ‘Mike Keneally’ we felt that was the best we have ever played live, but it also showed us where we can still improve. Thankfully we can soon get rid of the keyboard backing completely and have Moray playing the parts live.

Crash Chords:  How about apart from music; does anyone have any hobbies or interests still competing for dominance?

Steve: I have to admit to being a little bit of a social animal, but have recently got back into mountain biking… I also collect vinyl.

Darran: Music absorbs every second of my available time as it probably does for the majority of musicians.

Dan: If doing nothing is a hobby then I like that; it certainly interests me! In all seriousness I can’t say anything in particular competes for dominance. 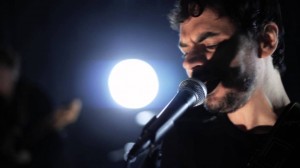 Crash Chords:  On the abstract side of things, some food for thought: if you had to choose a permanent style, which would it be, atmosphere or energy?

Steve: Atmosphere, you can still have energy within that.

Dan: Energy! In all honesty you can’t have one without the other. But for me music that is mostly just atmospheric gets pretty boring after 10 minutes. A track that has energy and keeps going to new places is what I like listening to.

Darran: Energy.  I tend to agree with Dan: if it’s too atmospheric it can quickly get boring.  You’ve probably noticed that throughout this interview, we rarely seem to agree with one another!

Crash Chords:  Do you see yourselves furthering the style you’ve begun with The Envisage Conundrum or do you plan to explore new territory?

Steve:  I think we will strive to come up with something different again, whilst still putting our individual stamp on the music, of course.

Darran:  Whereas I think we’ll end up furthering the style we began with TEC!  I think the album after next will be the one where we will consciously try something different.

Crash Chords:  To close out, do you see a North America tour in your future?

Steve:  In a word, yes, although no firm plans are in place at the moment.

Darran:  There are plans afoot, but we won’t know for definite until the end of this year/beginning of next.  It is a personal ambition of mine to tour America, and I’m determined to achieve it.