(Hed) P.E. Is Evolving With Their New Record “Evolution”

(hed)p.e. is a group that I latched onto very tightly in my high school years. They were one of the earliest “heavy” bands I listened to (not counting classics like Megadeth and Metallica). Needless to say, without dating myself any further, they’ve been around a long time. On July 22, their brand new record, Evolution, is coming out on Pavement Records. This is the (hed)p.e.’s tenth full-length studio album.

I recently had the pleasure of chatting with the band’s Newcastle-born bassist, Mawk (Mark Young). Mawk mentioned that the band is doing something a little different with the new record. Out of the 12 tracks, 8 rock out with the same “heaviness” I’ve come to expect. The other 4, however, are heavily Reggae-influenced.

(hed)p.e.’s current lineup consists of Jahred on vocals, Jaxon on guitar, Mawk on bass, and Trauma on drums. Mawk explained that he “got my first bass Christmas of 1981 and it only took me 18 months to convince my parents it wasn’t another fad.” Jahred and Mawk have been with the band since the beginning. Jaxon joined the band in 2004, and Trauma joined in 2009. The band lives all over the country but they are still in constant contact and are working harder than ever to put together great music for their fans.

Commenting on the process, Mawk had this to say:

“We had the drums recorded at the Mushroom Head Studios in Cleveland, and Jaxon went into a studio somewhere near where he lives in Michigan and recorded guitars along to drum machine beats. I did my bass tracks at the beginning of this year. Half of them were done in a hotel room (until we had to check out and go to the next show), and the other half were done at the side of the stage running a line out of the back of my rig with my headphones jammed in my ears while Smile Empty Soul was sound-checking. We were just taking any opportunity we could to get these tracks laid down. It’s very punk rock and about as far away from the major labels as we could possibly get.” 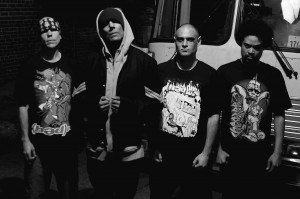 It’s clear to me that Evolution is going to be a defining album for (hed)p.e. As for a favorite track, Mawk states that he doesn’t “have a particular favorite, and for the first time ever I can honestly say that there are no tracks that I would even skip on this album right now. I’ve said it quite a few times at this point: ‘I could walk on stage and play this album from song #1 to song #12, in that order, and walk off.'”

It sounds like to me that this band is brimming with confidence and pride from their new record. Be sure to go check them out on tour this summer with Powerman 5000. The first single of the record, “One More Body” can be found here