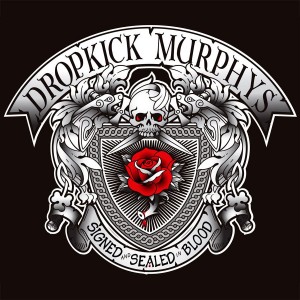 For years, Dropkick Murphys have been able to produce music with a distinctive flair. Probably best described as ‘enthusiastic’, they have succeeded in creating a new tone, Irish-American Rock. Boston has always been at the forefront in their music, and their matter-of-fact lyrics, coupled with a punk discord and splashed with a unique choice of instruments (such as bagpipes, accordions, and mandolins), have always set them apart.  With their newest album, Signed and Sealed in Blood, one fact is apparent: they haven’t changed.

On the plus side, that means you’re going to get exactly what you want from it, a raunchy party. Raw emotion is delivered, whether it’s the explosive riot in “Out Of Our Heads” or the explicit anthem in “Burn”. You need to throw your head back and scream along; the album practically demands it. And order some whiskey while you’re at it!  Then “Prisoner’s Song” offers a solid Irish jig, with charged lyrics and great transitions.  And then a near-love song (since nothing Dropkick does can really be classified as ‘love’), “Rose Tattoo” is a great tale of a man whose life is documented on his own skin, telling his love that the only ink he doesn’t regret is her name. It’s sweet.  Almost, anyway; we are talking about pub music after all. 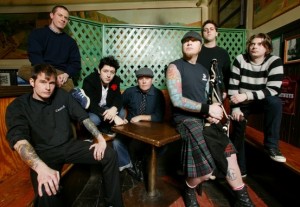 But here is where some issues arise. There is a commonality in the entire Dropkick discography. While each song is different, there are too many similarities in their work to really forgive the technical changes in their sound. So much of Signed and Sealed could have been placed on any other album. The lyrics are still screamed, wearing at times, and the melodies become repetitious. But my biggest gripe is the enthusiasm. “Jimmy Collins Wake” seems like a poor copy of “Finnegan’s Wake”, emulating the same enthusiasm in the same tone. Then the dark humor in “The Season’s Upon Us”, while funny the first time, doesn’t really fit the tone at all.  And “Don’t Tear Us Apart” hearkens back to Classic Rock in consistency, breaking the flow of the album, and falling flat in spite its lyrical energy.

As a whole, though, I am still a believer. Signed and Sealed recaptures the original distinctive qualities Dropkick has owned throughout the years. Possibly showing themselves a little long in the tooth, Dropkick Murphys know their style and deliver an album that fans will enjoy. It’s also refreshing to have an album so genuine and self-aware. Dropkick is simply calling out for all rockers to rock.