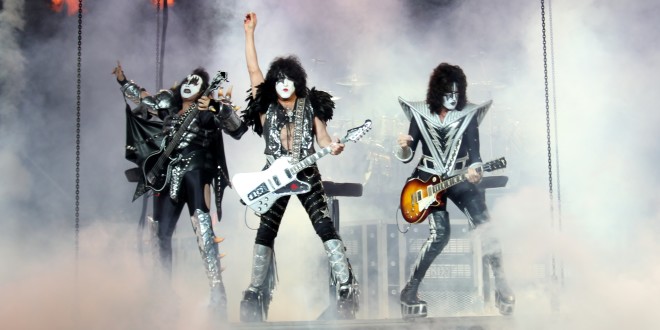 KISS is a band that needs no introduction. Their new record “KISS 40: Decades of Decibels” is a 40-year retrospective of this epic and talented band. It’s chock full of goodies including studio favorites, live tracks, and both previously released and unreleased demos. The mix of live, studio, and demos gives the album a variety unlike that of other anthologies. This collection doesn’t pull its punches and gives you everything to know and love by one of the greatest rock bands ever to walk this spinning blue marble. Some of my personal favorites are “Rock And Roll All Nite (Live)”, “Lick It Up”, and “Psycho Circus.” The previously unreleased demo of “Reputation” was a wonderful treat. The almost rockabilly guitar and backbone of drum and bass make for a fantastic voyage. The guitar solo about halfway through is intricate and engaging. The vocals, as expected, are tight and playful. All around an A+ track. This album is perfect for the KISS completionist in all of us.

The tracklist for this 40 year odyssey is as follows:

KISS is also going on tour this summer with Def Leppard, another rock and roll giant. These musical badasses are also doing something big for our veterans–they are hiring 2 of them as roadies as part of the U.S. Chamber of Commerce’s Hiring 500,000 Heroes Program. The tour kicks off in West Valley City, Utah on June 23rd and ends in The Woodlands, Texas on August 31st. For more details on the tour, visit http://www.kissonline.com/tour where all show dates and locations can be found. Tickets are currently on sale.