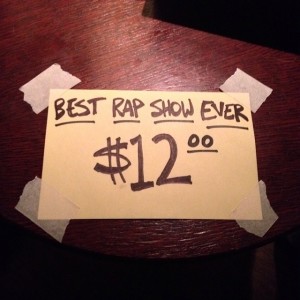 Sunday night, February 9th 2014, I had the wondrous experience of attending the best rap show ever featuring the likes of Tribe One, Louis Logic, Mikal kHill, Adam WarRock, and last but not least, Schaffer The Darklord. (I have a photo to prove that the title rings true, courtesy of former guest, Nelson Lugo.) The Fifth Estate on Fifth Ave. in Brooklyn was the venue that housed this awesome band of wordsmiths for this momentous night, and indeed these incredibly nerdy and brilliant rappers hit me with a barrage of hip hop punches from the moment the first act hit the stage. 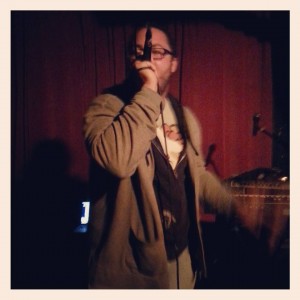 First up, hailing from Atlanta, Georgia, was Tribe One. This was my first time seeing him perform though I was already quite acquainted with his work. Before his performance I was a fan. After his performance I was completely enamored. His rhymes were both powerful, profound, and of course, nerdy as sin. His high energy showed that his formost concern was ensuring that both he and his audience were having a great time. The songs he performed included (but were not limited to): “I’m Kind of a Big Deal”, “Single Player”, “The Official Handbook of the Marvel Universe From A to Z”,  and “Kaiju (CrushKillDestroy).”  He also performed “Doing It Wrong” from his upcoming collaboration, wonderfully titled Malibu Shark Attack! Tribe One is clearly a skilled performer who knows it and enjoys the hell out of what he does. It was definitely an entertaining watch. 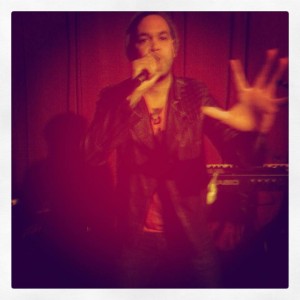 Next up was Brooklyn local, Louis Logic. Prior to this show, the only thing I’d known him from was a guest spot on the Adam WarRock track “Sallieri” (which also featured MC Frontalot).  Not knowing quite what to expect, I had noted from the very beginning that Louis’s stage set-up included a keyboard lurking in the background. His sound was a far cry from traditional hip hop, instead choosing a more ballad-infused brand of hip-hop. He spent the verses rapping and engaging with the crowd, but when he reached the choruses he found his way to the keyboard and began to sing and play.  It was a unique, sincere, and heartfelt performance. It was also a refreshing balance of the cocky and the comforting. Quite a few of the songs he played were from his most recent release entitled Look On The Blight Side, including a song of the same name. Louis Logic impressed me that night, and since then, I’ve become a major fan of his work.  I am also looking forward to having him as a guest on the podcast come April.  Shameless plug conceded. 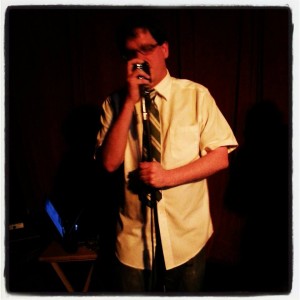 The third performer to hit the stage was Mikal kHill hailing from Charlotte, North Carolina.  Like Tribe One, I was familiar enough with Mikal’s work going in, but was still excited to seem him perform for the first time. Cheekily, he slid onto the stage, smooth and ready to rhyme, and then began to do just that.  Taking from a more straight hip hop style, he still maintained his nerdy content with an intelligent, and sometimes outrageous, lyrical spin.  First, he hit us with some fan favorites like “I’m Awesome” and “Inside The Box.” Then, for those more familiar with his work, he sung a few songs from his previous rap group, The Thought Criminals.  He even threw in a sneak preview of the new record he’s been working on, with the fluid, yet aggressive number, “Martyr”.  Mikal kHill is a cocky yet conspicuously nerdy rhymer who knows how to engage and entertain. 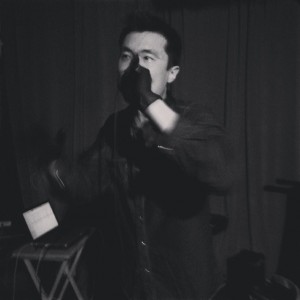 Up next on stage, from Memphis, Tennessee, was Adam WarRock. I’m incredibly knowledgable of Adam’s work. In fact, I’ve been consuming his latest record The Middle of Nowhere on an almost daily basis. He arrived on stage with an imposing presence, as if leaving a trail of fire behind him. Brimming with excitement, it seemed he couldn’t stand still as he started to spit rhymes, rapid-fire. Full of stories, pulling the crowd in, and making them laugh, he played familiar songs like “Magneto Was Right” and “Rather Hang With You (Than Play More Pokemon).” A personal highlight for me, however, was when he called Schaffer The Darklord onto the stage to sing their epic duet,  “Mark & Eugene” — but instead rapped over “Beverly Hills” by Weezer. The set’s finale was even more incredible when Adam WarRock called up Louis Logic and MC Frontalot (who apparently had been in the crowd the whole time) up to the stage to perform the afore-mentioned “Sallieri.” Adam WarRock in the flesh was everything I had hoped for and more. He knows his fans and knows how to enchant them with every word. 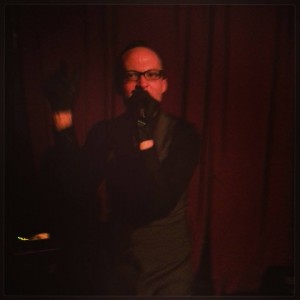 Then we came to our final performer of the night: New York’s very own Schaffer The Darklord. Schaffer exploded onto the stage with “The Opener” (the opening track from his brand new record Sick Passenger).  Over the course of his onstage bad-assery, he hit us with a remix of “Boo! (I’m A Ghost)” as well as “Giant Iron Snake”, “Do Sex”, “Mice”, and “Buckets Of Blood” just to name a few. One particularly special treat was a performance of Schaffer’s edgy feminist anthem, “Boys,” featuring KristyBee! who was also at the show. It was a super-charged live experience. Schaffer himself is a talented and engaging performer who knows how to work a crowd. I’d seen him many times before, and this was hands down his best performance yet.

This careful blend of rhyming and wit made this one of the best rap shows I’ve ever been to.  These performers are no strangers to quality entertainment, and their skills as musicians are only matched by their stage personalities and zest for collaboration.  Each performer has a keen ear for detail in the flow their wordplay, and their comedy easily holds its own. It was also a blast to see so many of them unite for this single evening. Undoubtedly, these burgeoning talents will continue to conquer the world one rhyme at a time.