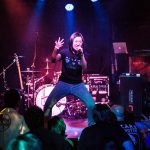 Today, Matt welcomes Lex The Lexicon Artist, a Taipei-raised, Oakland-based nerd core rapper. With a debut full-length album out called Raging Ego, and two music videos (for the singles “Glasses” and “Artist Anthem”), Lex discusses her early exposure to rap in Taiwan and who her early influences were. With Matt, they discuss her visit to NYC, what it was like to perform at SXSW 2018, and chat about the connectivity of social media and how it’s helped her reach more people more quickly and directly. And so, from her love of anime to the progress she’s already made on her second album, here’s presenting Matt Storm and Lex The Lexicon Artist.